The Grizzlies is a survivors’ tale of youth and hope

A new Canadian film goes beyond the sports genre in a compelling human drama that takes the viewer into the issues of identity affecting indigenous communities worldwide, writes Dan McAloon.

The Grizzlies is based on an inspiring real-life story about the youth of Kugluktuk, Nunavut – an indigenous Inuit town in the Arctic – who are transformed by the power of sport into a model of hope and pride in a place where history and remoteness has left a dysfunctional community disconnected from its tribal traditions and purpose.

Ben Schnetzer plays Russ Sheppard, a newly minted teacher who with two days’ notice has taken the job in Nunavut as a means to notch up his hours of community service before he goes off to a posh school – or so he thinks. Coming in on a light plane Russ remarks of the seemingly endless icescape passing below, “Hmm, no trees”. Noticing an Inuit elder sitting in another seat Russ asks the man if he is “a local”. The elder nods. “You lived up here a long time?” Russ asks. “6000 years,” replies the elder. 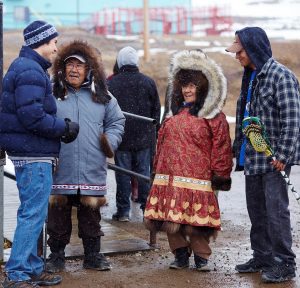 Down on the Inuit’s ancestral lands things are stark for the people. A young man walking with his dog across snow-covered flatlands appears to embody the indigenous hunter alive in the young generation. But when the youth stops and takes up the rifle slung over his shoulder it is to fire a fatal self-inflicted shot that turns the snow blood red. An on-screen title card reveals that Kugluktuk has the grim distinction of being the town with the highest suicide rate in North America.

None of this is known to Russ Sheppard as he enters the classroom on his first day and tries to ingratiate himself with his sombre disengaged students. He tells them they need not address him as “Mister Sheppard” and they push back immediately, informing him that “Mister” is a white man’s word for which the Inuit hold no respect whatsoever, and school is a place they do not value. They leave. Russ’s first day as a teacher is a failure.

Russ’s own education in Kugluktuk begins in the dialogue he has with the teens, played with dignity and candour by a cast of young Inuit. Standouts in these roles include Booboo Stewart, Anna Lambe and Emerald MacDonald. Russ learns of their dissolute lives as the offspring of a generation of parents who have suffered the traumas of forced family separations and abusive institutionalisation. They themselves are caught in the circling whirlpool of boredom, drugs and alcohol, cowered child victims of domestic violence who live without hope, and for whom only death or oblivion is a release. 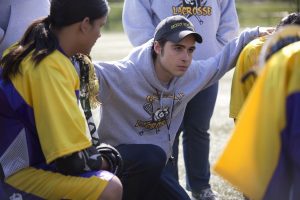 The catalyst for change is a stick and ball game called lacrosse that was invented by First Nations people to resolve conflicts. Russ Sheppard is a passionate lacrosse player and the playing stick he carries about the streets of Kugluktuk becomes a joke with the townspeople. But when the school’s principal, Janace, grumpily agrees to Russ’s plea to buy more lacrosse sticks for the students, his informal after-school lacrosse practice sessions become the novelty that lures the reluctant teens in – even though Russ initially pays one of the boys $20 to bring along other trainees. From a position of stubborn resistance, awkward participation and teamship grow – the trade-off being that the students also agree to attend school.

So Kugluktuk’s own lacrosse team The Grizzlies is born. Advice to keep fit and cut down on drinking and smoking is taken in the context of what is best for the team. The ensuing competition between mixed teams of girls and boys becomes a focus that brings the townsfolk together to watch weekly games in the little-used sports centre. 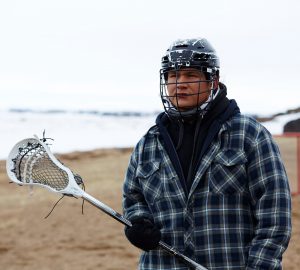 When Russ enters The Grizzlies in the national league with play-offs in Toronto, the community is drawn into the herculean task of raising the $30,000 necessary to get them there. As in the true story on which the film is based, there is strong vocal opposition by elders about the merits of this venture because the money drawn from community funds comes from precious royalties paid by a diamond mine operating on Inuit lands. These funds are prioritised for health and welfare services.

However, in this deeply divided town surprising alliances emerge between old and young, with the teens eventually pleading their case before the town council in positive heartfelt terms that speak to their deepest desire to achieve something they can be proud of, something to call their own. Over the objections of the naysayers The Grizzlies get their wish and go to Toronto and compete in the National Lacrosse Championships.

The Grizzlies goes far beyond the genre of a sports film and presents a compelling human drama that takes the viewer into the most vexing issues of identity affecting indigenous communities worldwide as they live out the legacy of post-colonialisation and failed attempts at assimilation and forge their own destiny as kindred people with unique skills living in their own country. 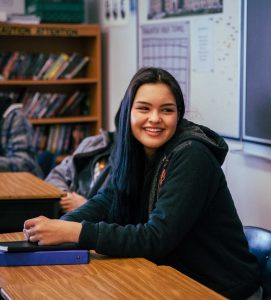 In its respect for Inuit culture – 91% of the cast and one-third of the film’s crew are Inuit – The Grizzlies is an important statement by the indigenous filmmakers of an emerging voice in Canadian movie-making that has parallels with the rise of Australia’s own indigenous actors, writers and directors and their desire to document their stories through their own eyes.

The Grizzlies is the first story the Inuit wish to tell – a survivors’ tale of youth and hope. It chronicles how Inuit youth become the teachers of their teacher-coach and of each other, imparting mutual trust and support that exceeds any ‘win or lose’ outcome in a game of lacrosse. The real game here is all in the subtext – living life to its fullest potential as a proud and resilient people.

The Grizzlies is available to rent on WONDER.

Sisters’ presence in the West lives on through Good Samaritan Oblates