Sing a new song: The Book of Longings

This new novel by Sue Monk Kidd is an inspiring story set in the 1st Century about a woman who finds her voice and her destiny, reviewed by Tracey Edstein.

I feel I ought to begin with a spoiler alert, although the premise of this wonderful book is in the first line, so maybe no alert is necessary. When I pick up a book in a bookshop (one of the joys of life) I always read the opening lines.

I am Ana. I was the wife of Jesus ben Joseph of Nazareth. 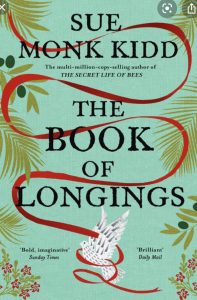 Provocative, yes, but not for the sake of provocation. Rather, Sue Monk Kidd uses her considerable skill as a storyteller to open another window on the scriptures which informed her Christian upbringing in the state of Georgia, USA.

While those schooled in the gospels know well the longing of Jesus to bring about the reign of God – and the longing of his disciples to see Roman rule overthrown – the longings of the title are those of Ana, a young and faithful Jewish woman whose parents’ wish that she be ‘well married’ is the greatest cross she bears.

“All my life, longings lived inside me, rising up like nocturnes to wail and sing through the night.”

Ana’s father, Matthias, is head scribe and counsellor to the tetrarch, Herod Antipas, and a man without scruples. However, he does allow Ana to be educated (unheard of for a daughter) and provides her with papyrus and dyes to mix her own inks. Writing is Ana’s salve and salvation, her way of giving voice to the matriarchs:

“Listening to the rabbis, one would’ve thought the only figures worth mention in the whole of history were Abraham, Isaac, Jacob, and Joseph … David, Saul, Solomon … Moses, Moses, Moses. When I was finally able to read the Scriptures for myself, I discovered (behold!) there were women.”

So she begins to document the stories of the largely overlooked women: Eve, Sarah, Rebekah, Rachel and so on. Ana is happy in this task, but it is interrupted by the terrible news that she is to be betrothed to an older widower, Nathaniel ben Hananiah. Nathaniel wants a son, and power, and Matthias wants land. The conditions of the betrothal satisfy both men – while Ana’s longings seem destined to remain just that – longings.

On the day Ana learns she is to be betrothed, a serendipitous encounter with Jesus presages a turning point. “He reached out his hand, a labourer’s hand. Thick knuckles, calluses, his palm a terrain of hardships.”

Clearly, a lot has to happen to bring Ana and Jesus to marriage. While the reader knows their life together must be short-lived, Monk Kidd’s skill as a writer is such that not only does she ensure you keep reading, she offers hope in spite of all. Most satisfyingly for this reader, she allows no room for the doctrine of atonement, preferring a scenario that preserves the at-one-ment of Jesus and Ana, beyond death.

Two years after the crucifixion – “Where were these disciples of his? … Were we women the only ones with hearts large enough to hold such anguish?” – Jesus appears to Ana.

It’s important to say that in imagining Ana’s story, Monk Kidd is far from beating a drum. Rather, it’s as if she’s strumming the lyre played by her character, Tabitha, who has literally lost her voice and expresses herself through music. “Already she could make it sing … she sang a new song she seemed in the midst of composing.”

In The Book of Longings Sue Monk Kidd is singing a new song, one that has much to offer the open-hearted reader who brings her, or his, own longings to its pages.

In an informative author’s note, Monk Kidd fleshes out her intention in her writing. While she acknowledges that The Book of Longings is a novel, it’s also clear that it involved a great deal of research and that it’s written with deep respect.

The questions Monk Kidd poses are potent: “How would the Western world be different if Jesus had married and his wife had been included in his story? … How does imagining new possibilities affect realities in the present?”

I think Ana, the wife of Jesus ben Joseph of Nazareth, would agree with the character Esme in Pip Williams’ novel, The Dictionary of Lost Words: “Words are our tools of resurrection.”

These are Ana’s words:

Lord our God, hear my prayer, the prayer of my heart.
Bless the largeness inside me, no matter how I fear it.
Bless my reed pens and my inks.
Bless the words I write.
May they be beautiful in your sight.
May they be visible to eyes not yet born.
When I am dust, sing these words over my bones:
she was a voice.

Could they be your words too?

Tracey Edstein is a freelance writer and editor based in the Hunter Valley, New South Wales.