Good Samaritan Sister Liz Wiemers has farewelled the Santa Teresa community in Central Australia after 12 years of ministry there. She spoke to Debra Vermeer about the challenges and joys.

Santa Teresa, or Ltyentye Apurte, is a small Aboriginal community located about 90 kilometres from Alice Springs in the Northern Territory. Its landscape is the striking red dust of the desert country and when the rains come, the road to Alice is often unpassable.

But for Liz, who hails from North Queensland and worked as a jillaroo before joining the Good Sams in 1987, it has been home for more than a decade, making her recent farewell an emotional affair. 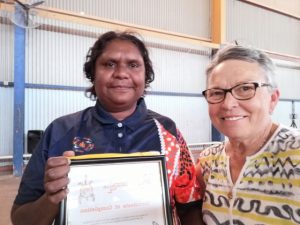 “Living remotely isn’t easy,” she says. “Sometimes you feel like you’re taking two steps forward and three steps back. But I’ve always found that if it’s a hard day, I can go and sit with the local people and I’m fine.

“Since they’ve known I was leaving, it’s been lovely. I was walking around and one person said to me, ‘It’s not going to be the same when you go’ and another fellow said, ‘I’m just going to miss you so much.’

“That’s their ministry to me.”

When Liz first arrived in Santa Teresa, the Howard Government’s ‘Intervention’ was still in its early stages, a set of policies enacted in response to the ‘Little Children are Sacred’ report which found that child safety issues in Indigenous communities had reached crisis levels.

The Intervention applied to 73 Indigenous communities in the Northern Territory and its powers included withholding 50 per cent of welfare payments, increased police presence in communities and the power for government to take possession of Aboriginal land and property. 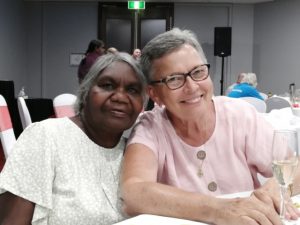 “It was a hard time for the people,” Liz says. “So one of the joys I’ve had has been being able to do some advocacy from time to time. I define advocacy as saying what the people want said and not what I want to say.”

Liz says her advocacy ranged from overarching policy matters to smaller, but still significant problems experienced in the community, such as officials not responding to reports of a broken hot water system.

“So it’s not speaking for them, but giving voice to the people’s concerns,” she says.

Another joy for Liz in her ministry has been working with the many school immersion groups which visit Santa Teresa each year.

“I’ve loved the opportunity to work with the immersion groups and to educate them and raise awareness of issues relating to Aboriginal people in Australia,” she says.

“Many of those students still keep in touch. Some have gone on to take up careers in remote nursing or education or other things because of their experience in Santa Teresa, and that’s pretty special.”

The first is to foster independence as opposed to a dependency model. “So, instead of doing things for people, you do things with them,” she says.

The second principle was the responsibility to be a good steward of people, property and finances. “And that means to be accountable to the people themselves and to be transparent.” 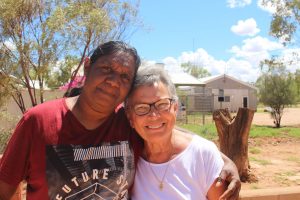 One way she’s helped to foster independence and good stewardship is the development of the Santa Teresa Spirituality Centre, a place where the town’s women gather to spend time together while painting beautiful crosses which have been made by the men.

“It’s done wonders for these women, to give them that independence and sense of purpose,” Liz says.

“At each step along the way, I would always consult with them about how we should do it. And now, it’s lovely to see the pride in their work.

“We’re always being asked for crosses and they’re now not only found throughout Australia, but there’s one in Antarctica, Alaska, Iraq and they’re right around the world.”

Her ministry of deep collaboration with the local Arrernte people has been marked by continual learning of their culture and language.

“I was blessed to have a very good teacher, a local woman,” she says. “Her way of teaching was a very great help.”

As a result, Liz can now read and understand the Arrernte language at a basic but functional level.

“With the culture, I don’t leave the same as when I came. I won’t ever be able to think in only a whitefella way again, even when I transition back into mainstream,” she says.

“I’ve been blessed to have been taught aspects of deeper culture which they don’t share with everyone.” 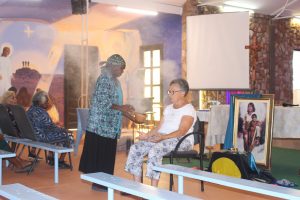 Local couple Kellie Mayne and Marcus Williams, who met when Kellie returned to Santa Teresa as a teacher after she had been there for a school immersion some years before, say Liz will be missed. “Sr Liz is such a good stick,” says Kellie. “She’s always available to everyone and anyone. Her door is always open. Locals often go to her for prayer, help and advice.”

Marcus agrees that Liz’s embrace of the Arrernte culture and her warm presence have made her a much-loved member of the community.

“She’s a person who understands our way of life in a cultural sense,” he says. “For instance, when a person passes away, she knows what the protocols are and how to approach people, how to be gentle about it.

“And just being there for people. People knew who to go to in terms of questions about things they didn’t understand. Even with the COVID-19 pandemic, people were panicking, but then they approached Sr Liz and asked her about it and she explained everything.

“Sr Liz spent a lot of time creating relationships. She’s been a rock in our community.”

Liz says she will miss not only the people of Santa Teresa, but also the Religious who are working in Central Australia and with whom she helped initiate regular social and prayer gatherings.

She will be taking some time for rest before moving on to her next appointment. “I’m not sure what that will be, but I have a sense it will be picking up something in the area of working with marginalised people.”