Sister Monica Armstrong says she has a lot to be grateful for when she reflects on her years in school Family Liaison and her previous teaching life, writes Debra Vermeer.

When the COVID-19 pandemic put the brakes on Monica’s longstanding role in Family Liaison at St Thomas Aquinas Primary School in Springwood, she reluctantly decided the time was right to retire from a ministry that has been both fulfilling and humbling.

Monica arrived at the school in 1996 after a career in teaching infants’ school in South Australia, New South Wales, and Queensland. Her final teaching appointment was in Port Pirie and after a sabbatical, she felt ready for something different. When the Sisters of the Good Samaritan were looking for someone to work in a school pastoral role with the Diocese of Parramatta, Monica got the job.

“It was a big step. I’d come from a place where I knew everyone, where I was comfortable in what I was doing, and here I didn’t know what the role entailed and it was new for the school too,” she says. 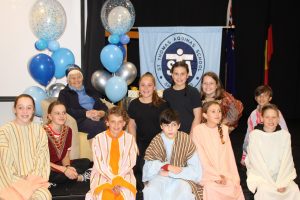 Before long, the Family Liaison role at St Thomas Aquinas began to take shape, based on Monica’s commitment to forming personal relationships with the students and their families.

“I would send out a letter to families, saying I was available for home visits,” she says. “If they wished me to visit, they would fill in the form and send it back with an agreed time. After the visit, I would come back and record some notes and give those notes to the principal and assistant principal.

“The idea was to be a point of contact between home and school and to help parents see that the school and parents work together for the good of the child.”

Monica says the school gate was also an important point of contact with families. “There were some families who wouldn’t accept a home visit, but we’d have lots of chats at the school gate. As the time passed and we got to know one another, they would say to me, ‘Sister, you haven’t been to visit yet’. So they’d been sussing me out and when they saw that there was no preaching or judging, just friendship, then the invitation would come.”

During home visits the conversation would range from light-hearted to more serious, depending on the lead taken by the family.

“We talked about anything and everything. Sometimes serious things would come up, sometimes they didn’t. I’m not a counsellor, but I’m a very good listener,” Monica says.

“The trust shown by the families to invite me into their homes and open up to me in various ways has been amazing and very, very humbling.”

Monica says that over the years, she supported families undergoing separation, or dealing with a death, or some other trauma, including a devastating bushfire which swept through the area in 2013, destroying many homes in the Blue Mountains.

After the fire came through, Monica sought permission to go beyond the emergency cordon and inspect the damage for herself. “Because that way, I’d seen what the children had seen and they could talk to me about it,” she says. 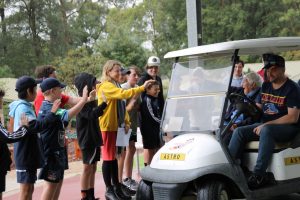 Sport has been a great point of connection with families and Monica’s love of the Adelaide Crows AFL team was well known around the school.

At her farewell last month, Monica was greeted by a sea of the Crows’ club colours of red, navy and gold, adorning hundreds of students and staff as she rode past in a golf-cart, in a send-off worthy of any grand final. “It was absolutely fantastic,” she says. “The way they’d interwoven the Crows theme into everything. I loved it.”

At 84 years of age, Monica had not been looking to retire, but because of her vulnerability to the COVID-19 virus, her ministry of home visits had been transformed into a ministry of phone visits, and she began to feel she wasn’t fulfilling her role.

“Plus, I was missing my contact with the children,” she says. “I knew retirement had to come one day, so I bit the bullet.

“I went into the chapel one day for morning prayer and I had tears in my eyes and suddenly I burst into tears and I said, ‘Well Lord, are you telling me it’s time?’

Monica says that when she looks back over her years at St Thomas Aquinas and her previous teaching life, she has “a lot to be grateful for”.

“I have to thank God for my gifts and giving me the opportunities to use those gifts,” she says. “And I thank God for my vocation. I’m only here because I’m a Sister of the Good Samaritan.”

Monica, who lives in the Good Sams’ community at Lawson, which is also home to the Novitiate, says she is hoping to keep up some visitations as well as do volunteer work, but is open to God’s plans for her retirement.

“I’ve already been asked by the school if I’d be interested in taking part in the grandparents’ literacy support program for students at St Thomas Aquinas next year and I jumped at that,” she says.

As she heads towards her 85th birthday in March, Monica is also up for any adventure that comes her way, having last year visited the Good Samaritan ministries in Kiribati.

“Oh, that was a wonderful experience,” she says. “And I’m just so grateful for it.”

During her visit to the Pacific island nation, Monica was able to meet some of the family members of the Good Sam novices who come from Kiribati and with whom she lives.

“It helped me because I’m here with the novices from Kiribati and now I know so much more about their lives and their background and way of life. It has really helped me get to know them even better,” she says.

“And everyone looked after me so well – they really looked after the ‘old girl’. It was fabulous and it’s something else to thank God for.”