Sustained efforts to care for creation are taking flight

A spectacular flurry of butterflies is a welcome sign that the ecological restoration of endangered woodland is helping to ensure fragile ecosystems are restored for future generations, writes Debra Vermeer.

A chance encounter with a huge cloud of butterflies within the Sisters of the Good Samaritan’s Wivenhoe Conservation Area recently brought further confirmation that the efforts to conserve this part of the threatened Cumberland Plain Woodland are bearing great fruit.

Geoff Green, Manager of Wivenhoe and Environment Conservation (WEAC), was working on the site with colleague Brendon Levot, the site manager from Toolijooa Environmental Restoration, when they happened upon the butterflies.

“There was a tree in blossom and we looked up and saw the bush was just buzzing,” Geoff says. “There were so many butterflies and moths. It was absolutely beautiful.” 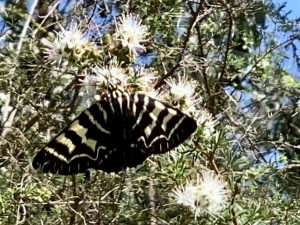 The butterflies were one more affirmation of the Sisters’ decision to embark on the ambitious Wivenhoe Conservation Project to restore 164 hectares of the endangered ecosystem on the Mater Dei property, at Camden in southern Sydney, as part of their commitment to care for creation.

In 2012, the Sisters entered into a contract with the NSW Government’s Office of Environment and Heritage (OEH) to set aside a piece of land on their 260 hectare property for ecological restoration.

The site has two BioBanks, about 80 hectares in total, where the OEH, through the Biodiversity Conservation Trust, provides funds for the gradual restoration of the land. Each year, agreed outcomes, including the removal of feral animals and weeds and regeneration of native species, must be achieved, so that money can be released for further work.

The site has been owned by the Sisters of the Good Samaritan since 1910 and is the largest privately owned tract of Cumberland Plain Woodland in the Sydney basin – an ecosystem which has come under increased threat since colonial days when it was cleared for grazing. It has suffered from the relentless spread of urban development and the detrimental effects of introduced plant species.

Intrigued by their discovery of the butterflies on the site, Brendon took photos and set about identifying them, uncovering an amazing story of symbiotic flourishing. He found that the smaller of the butterflies identified was a Fiery Copper (Paralucia pyrodiscus). 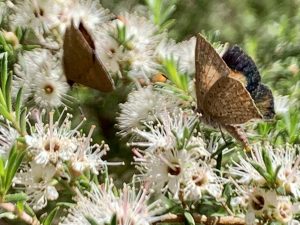 “The female butterfly of the Fiery Copper lays her eggs on the stems of the Sweet Blackthorn (Bursaria spinosa),” he says. “Once the eggs hatch in April, the larvae are retrieved by Notoncus spp ants, which take the larvae down below the ground to their nests to provide a safe haven.

“Every night throughout winter the ants accompany the larvae up and out of the ground to feed on the leaves of the Blackthorn. At least four ants are providing overnight protection at this point for each individual.

“When the butterfly larvae have had their fill, they are escorted back to the nest. In return, the larvae excrete a sugary substance, which is then taken by the ants and farmed for their own nutrition.

“When the larvae are ready, they form their chrysalis within the ant nest and transform into a butterfly.

“By this point it is spring (September/October) and the Blackthorn and other plants are in flower. The emergent butterflies then gorge on a much-needed tasty treat from the spring flowering event. This is what was observed.”

Brendon says the second species that he and Geoff saw was the Mistletoe Moth (Comocrus behri).

“All that is known about this species is that it is associated with mistletoes that parasitise certain Eucalyptus and Casuarina species,” he says. “Who knows what intriguing symbiotic secrets this species is yet to divulge.

“Ultimately, what the symbiosis tells us is that this process is a really important building block component in the food web of the Cumberland Plain Woodland. We are helping to renew and enhance this through our efforts on site.

Geoff says the butterfly sighting capped off a busy year for the Wivenhoe site, as it began to recover from the recent drought.

While volunteer tree-planting groups were temporarily put on hold because of the drought conditions, followed by the COVID-19 restrictions, other important work continued.

“This year we’ve done some major work to arrest the progression of gully erosion by bringing in big granite rocks and lining the channels in significant areas,” he says. “That turned out to be really effective. We were hit by heavy rain in February, but that work is holding up well.”

In Autumn this year, 14,000 plants which are specific to the site were planted into an open grassland paddock.

“Toolijooa collects the seeds from various plants on the site and takes them back to their nursery and propagates them, so that what we plant back on to the site is particular to that area,” Geoff says. “In the past three years, we’ve planted 40,000 plants that were endemic to the site.”

Over the past six months, the team has also been working along the Riparian Zone – a particularly fragile section of land situated within 40 metres of the wet line of the Nepean River, which flows along the western boundary of the property.

Geoff says the work included the careful removal of the African Olive tree, an introduced species which takes over and chokes the native landscape.

“We remove what we can, without exposing it to significant risk of erosion, then we plant particular native species, such as the endangered Camden White Gum, along the riverbank,” he says.

A sustained program of controlling feral animals, including deer, goats and foxes, also continued this year.

“Thanks to that we are now seeing more native animals on the site, including wallaroos, swamp wallabies, Eastern Grey kangaroos, wombats, goannas, echidnas and of course snakes,” Geoff says.

A comprehensive bushfire management plan was developed to allow for targeted management by controlled burn of discreet areas in a mosaic fashion, while maintaining the ecological integrity of the site and meeting community fire safety standards.

Geoff says the work being done on the site is beginning to reap big rewards.

“Just look at the results,” he says. “This is such a wonderful place. I’m just blown away by the Sisters’ dedication to future generations. No other landholder has done this. God’s creations on this earth are spectacular and the Sisters are helping to make sure they are passed down to the future generations and that is just a truly amazing legacy.”

Keep up to date about community planting days, workshops and other activities at the Wivenhoe Conservation Project via their Facebook page.