On the steps of Monte Cassino on Benedict’s feast day, I experienced communion with all Benedictines who have gone before me and those who will come after, writes Sister Marella Rebgetz.

It was nearly midday when we arrived. It was midsummer, and a thunderstorm was brewing.

The two of us had come from Assisi. Ah Assisi, with its beautifully preserved and maintained medieval buildings, the doorways to its shops made cheerful with bright flowers and enticing displays of memories for purchase, the smell of garlic advertising freshly baked pasta in quaint cafes. Its winding streets and little lanes promised unanticipated surprises, and its numerous paintings and shrines portraying St Francis (and occasionally St Clare) were a reminder that this was a place of pilgrimage. Assisi had charmed and enchanted us, as it had the hundreds of thousands of tourists who visit each year.

I had not realised how hot and humid Italy could be in July. As we dragged our bags the kilometre or so from the railway station to our guest house, the sun reflected harshly off the cracked bitumen, and the sweat rolled down our faces and stained our clothes. There were no tourist shops to entice us, no old buildings calling us to stop in admiration, no smells of cooking to encourage us to stop for lunch. There were also no taxis to be seen, and no signs directing us to our destination, or even when we had reached it. 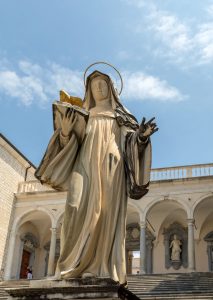 Unlike Assisi, Cassino does not appear to be a town that knows tourists. Despite wandering for blocks through and beyond what appeared to be the administrative centre of the town, I did not see a single souvenir, interesting trinket or even a postcard for sale. Wikipedia informed me that Cassino was a manufacturing hub, though it has suffered in recent years from the crisis in the automotive industry.

The shops were the types that service a working-class population – hairdressers, cheap clothing stores, homeware stores, pharmacies and a surprising number of stores selling car parts.

The Abbey of Monte Cassino, founded by St Benedict, sits in baroque splendour atop a hill about two kilometres outside the town. The outline of its formidable walls was visible wherever I walked in Cassino. In the oppressive heat I felt the presence of the monastery as aloof and judgmental, looking down on the town but not part of it.

There were more statues of St Rita, Padre Pio and St Anthony of Padua in the town and its churches than there were of St Benedict. Even inside the guest house of the Monastery of St Scholastica, run by enclosed Benedictine nuns, there was a dearth of images or memorabilia of St Benedict, and even less of St Scholastica. Benedictine pilgrims generally avoid the town of Cassino, instead taking a taxi directly from the railway station to the monastery.

As part of our self-organised Benedictine pilgrimage, we attended Mass at Monte Cassino on St Benedict’s feast day, and afterwards prayed at the burial place of St Benedict and St Scholastica. Almost nothing remains of the original abbey, the monastery having been significantly damaged or destroyed by invading armies and by earthquakes on multiple occasions throughout history. 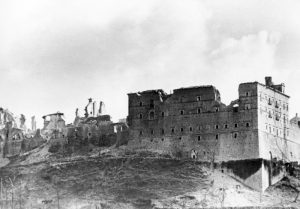 The current building is a testament to the resilience and stability of the communities of monks who have lived here through the centuries, and to their partnership with the wider community who have made it possible, having seen in Monte Cassino a symbolic value beyond the building itself.

The architectural style and decoration of the current church are a reminder that the vows taken by the monks do not automatically make one immune from the desire for worldly power and prestige. Benedict’s own struggles between following rules and following the demand of love, and of learning how to be a leader, are also recalled here.

It is at Monte Cassino that Benedict is believed to have written his own Rule, tempering the Rule of the Master with moderation and a compassionate and merciful understanding of human nature that can only have come from lived experience of both his own and others’ limitations and failings as well as by his and their commitment to seeking God.

This complex stew of human and divine desires and struggles is echoed in the multiple layers of the building. Resting on the steps to the church as we shared the leftover scraps from our breakfast, I felt at peace, grounded in the vows of stability and conversion of life of a tradition that has in its very foundation stone an understanding of my human and divine essence.

Whereas the experience that Assisi provides for the typical tourist is primarily a celebration of the life of St Francis (and to a much lesser degree St Clare), Monte Cassino is more a testament to Benedictine life and the seeking of God than it is a memorial to St Benedict.

Benedict’s cave (Sacro Speco) at Subiaco has an authenticity and quiet presence that often make it a more highly recommended pilgrimage destination than Monte Cassino, but I found the experience of Subiaco lacking somewhat because it whispers of an individual life, whereas Monte Cassino spoke to me of community. 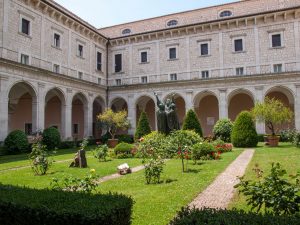 Death of St Benedict sculpture at the Abbey of Monte Cassino. Image: 123rf.com

On the steps of Monte Cassino on St Benedict’s feast day, I knew myself as a Benedictine struggling to live a life of work and prayer (ora et labora) in communion with all those who have gone before me and those who will come after, and that I am one of those depicted in the paintings on the walls leading down to and up from the crypt. In the streets of the town, having given up my search for a shop selling gelato, I sat and watched a woman washing the floor and windows of a nondescript café. Her energy in the sapping heat of the siesta prompted me to take out my RB and read again the Prologue 14-15: “Seeking his workman in a multitude of people, the Lord calls out to her and lifts his voice again: ‘Is there anyone here who yearns for life and desires to see good days?’”

I found myself looking up at the monastery, which from a distance appeared so solid and secure in its stability as it overlooked the town, wanting to say to it, to myself, come down from your high place, come join the people, be part of this town, they need you.

Phil Cousineau writes in The Art of Pilgrimage: The Seeker’s Guide to Making Travel Sacred, “I am convinced that pilgrimage is still a bona fide spirit-renewing ritual. But I also believe in pilgrimage as a powerful metaphor for any journey with the purpose of finding something that matters deeply to the traveller. With a deepening of focus, keen preparation, attention to the path below our feet, and respect for the destination at hand, it is possible to transform even the most ordinary journey into a sacred journey, a pilgrimage.”

Thus it was that there in the town, sweaty and somewhat unsure of where I was going, in the midst of ordinary people living ordinary lives, that I truly found myself to be a pilgrim.

Originally from north Queensland, Good Samaritan Sister Marella Rebgetz is a Member of Council of the Sisters of the Good Samaritan and lives in Melbourne. In 2019, she attended a Benedictine leadership course in Rome. Her professional background is in engineering.