July 2020
HomeJuly 2020An inspirational story about friendship, love and mercy

An inspirational story about friendship, love and mercy

This new film starring Renee Zellweger shows how an act of love to make a difference in the life of one individual can touch many lives, writes Asther Bascuna Creo.

In the late 1990s, one woman had a dream that started a movement to help homeless people in Texas. It also led to the production of a book and the true-to-life film Same Kind of Different as Me.

Before I had the privilege of viewing the film in my loungeroom during physical isolation required during the global pandemic, I had not heard about Denver Moore, Ron and Deborah (Debbie) Hall and their inspiring work in homeless shelters in Texas. Despite the book being a bestseller, I had not been aware of their amazing act of love and charity that brought them to make a difference in the lives of people experiencing homelessness. 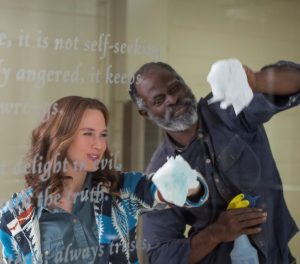 I had not read about how the Halls’ extension of friendship brought back Denver from a place of anger, which had been simmering through a life of hardship and his struggle through slavery, hunger and incarceration. Nor had I listened to interviews where Ron declared how it was, in fact, Denver who had saved him – from a life of selfishness, self-absorption and the heavy guilt of infidelity.

In the cast are Renee Zellweger as Deborah Hall, Greg Kinnear as Ron Hall, Djimon Hounsou as Denver Moore and Jon Voight as Earl Hall. The film was inspiring to watch and easily provided entertainment for two hours during my life in lockdown.

Central to the story is Ron’s wife, Debbie, whose dream about “a poor man whose wisdom would change the city forever” is seemingly credited as the catalyst that led to great things.

Having now watched the film, however, I strongly believe it all started to unravel due to her act of mercy towards her husband. 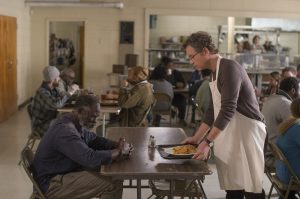 Ron was a successful art dealer and a Texan millionaire. He was also an adulterer, whose infidelity threatened to break up his marriage. However, in an admirable act of forgiveness, Debbie accepted him and promised not to mention his infidelity ever again.

This act of mercy, extended by Debbie during what could have been her highest point of suffering, could only have inspired the deepest regret and atonement from a wayward husband. It definitely had this effect on Ron, and he resolved to make it up to his wife by following her wishes.

To win her back, Ron accompanied Debbie to the toughest streets in town in search of the poor man she saw in her dream. Eventually, this led them to the Union Gospel Mission, where they began to volunteer serving food to people who were homeless and hungry.

It was here that they came face to face with stories of people’s struggles – from the cook who lost his son and his wife to mental illness, to the young woman whose son was taken away from her.

Ron and Debbie could have written a cheque, but they took the harder route to help ease people’s pain – to be present, to listen and acknowledge someone’s pain.

This is where they also met a violent and very angry Denver, whose nickname out on the streets was Suicide, implying that he was a danger to others. Debbie claimed he was the poor man in her dream. Through her insistence, Ron extended his friendship to Denver, bringing him a plate of food and seeking him out on the streets. 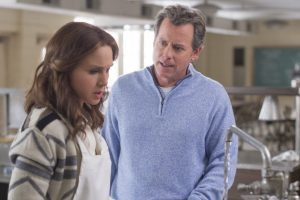 One turning point in the film was when Ron brought Denver to dinner at a nice restaurant, an act of unexpected kindness that led the latter to lower his guard, finally relax his angry façade and open up about his life and the hardships he had suffered.

What followed was the softening of Denver and the unlayering of his mask as he began to share more of himself with the Halls. Through it all they remained steadfast in their offer of friendship, even as Denver revealed the scarier parts of himself – how he had committed theft, handled a gun, and been driven to a point of desperation to commit crime.

Here we can say the film is trying to teach us something – that when we extend the hand of friendship and acceptance to others, we break down the barriers that act to separate us from each other.

The story reaches a point when the innate life wisdom of Denver is revealed, and how he has simply ceased to be the man they helped and become the friend and brother who is an important part of their lives. We see the Halls grew in their own faith and character through their friendship with Denver.

Ron Hall later said, “This man saved me from myself. Denver Moore became my mentor in life. He taught me the way to live, not the other way around. He saved me from being an arrogant, self-centered art dealer to becoming someone who actually cares about the well-being of others.”

The Halls’ friendship with Denver tested their relationship with people from their inner social circles, including Ron’s father with whom he had a difficult relationship.

Debbie was diagnosed with terminal cancer and passed away in 2000. At the service, the people she helped at the mission walked down the aisle to give her honor, in a church packed with her high society friends. Denver delivered the eulogy – a beautiful, heartfelt speech that drew a prolonged standing ovation. Denver spoke of how the love Debbie showed him made him a changed man and set him free.

Denver and Ron continued to be friends after Debbie’s death. With Denver’s encouragement, Ron reunited with his father and gave him his forgiveness. The seed of mercy planted by Debbie all those years ago thus finding its own expression in Ron’s heart.

Same Kind of Different as Me is the kind of film that inspires us to go beyond the boundaries of our comfort zone when carrying out our charitable acts. It demonstrates how a simple act of love to make a difference in the life of just one individual can have far-reaching results and touch many lives. Most of all, it demonstrates the strength of the virtue of mercy and how forgiveness can truly start great things.

Same Kind of Different as Me is available for purchase on DVD or digital platforms.

Asther Bascuna Creo is based in Melbourne and works as a fundraising direct marketing specialist. She is the mother of three children and a wife to a permanent deacon. In 2016 Asther's book Telling Stories was published by The Philippine Times. It is available on Kindle https://amzn.to/3dFQBso