At a gathering of the former Catholic Religious Victoria are (from left): Julianna Drobik OP, Veronica Hoey SGS and Cathy Jenkins. Image supplied.

Good Samaritan Sister Veronica Hoey has been appointed Vicar for Religious in the Catholic Archdiocese of Melbourne, a role which she said embraced the Good Sams’ Statement of Directions, calling them to “be leaven in fostering ecclesial community”.

“It is a privileged call to use my gifts to contribute in the building of ecclesial communities of compassion, mutuality and leadership in this particular way,” Veronica said. “Our Statement of Directions also invites us to stand with and bring hope to our bruised and grieving church.”

The Good Sams have strong links to the role of Vicar for Religious, with Sister Elizabeth Delaney currently serving in the Archdiocese of Sydney and Sister Bernice McDonnell having previously fulfilled the role in Melbourne.

In announcing the appointment, Archbishop Peter A Comensoli said Veronica would be well known to many religious in the Archdiocese of Melbourne through her involvement in, and leadership of, the former Catholic Religious Victoria.

“Veronica has also been involved in various committees and professional standards bodies here in Victoria, in particular, the Victorian Towards Healing Association and its Professional Standards Resource Group,” he said.

Having served on two leadership teams in the Sisters of the Good Samaritan, during which time her major responsibilities included oversight of Health and Wellbeing of the Sisters and Professional Standards, Veronica also had pastoral oversight for the Sisters in Victoria, Japan, the Philippines and East Timor. Currently, she has part-time responsibilities as Professional Standards Adviser for her Congregation and is a member of Good Samaritan Education (MPJP).

“In undertaking her new role, Veronica will seek an understanding of the distinctive nature of each religious congregation in the Archdiocese, in order to collaborate with me in my pastoral responsibility for caring for and nurturing the religious charisms of the many congregations that serve the ecclesial community of the Archdiocese,” Archbishop Comensoli said. 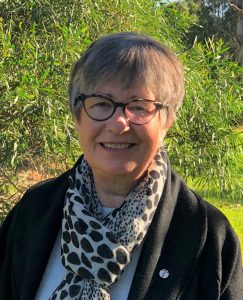 Sister Veronica Hoey has been appointed Vicar for Religious in the Archdiocese of Melbourne. Image: Sisters of the Good Samaritan.

Veronica said that over the past 15 years she had had a close relationship with many leaders and communities in Melbourne and Sydney.

“This experience has given me a good understanding of the particular context and culture of the church and the various ecclesial communities in which we are called to mission in Melbourne at this time,” she said.

She said that through her experience in professional standards she hoped to be a resource to support congregations in that area, assisting congregational leaders and communities in their formation and education on the guiding documents, Integrity in Ministry and the National Catholic Safeguarding Standards.

“As his delegate, I will collaborate with Archbishop Peter in his pastoral responsibility for caring for and nurturing the religious charisms of the many congregations in their diversity that serve the ecclesial community of the Archdiocese of Melbourne.”

There are more than 100 religious congregations in Melbourne, each with its own charism and cultural context.

“Each congregation brings its particular charism that is a gift to the ecclesial community, however that’s expressed in community life and mission,” she said.

Veronica said she is particularly looking forward to connecting with small or more isolated communities through the Small is Beautiful network, a group for supporting and resourcing congregations which have very small numbers in Australia.

“Through this network members have opportunities for formation and connection through various initiatives where they are supporting each other and being nurtured and resourced as a group,” she said.

“I also hope, through my role as Vicar, to be able to support communities both in times of need and on occasions of celebration, and to facilitate and support ways for consecrated life and new forms of religious life and governance and cultural realities to be nurtured and allowed to flourish.”

Towards the Plenary Council – people of God on a pilgrim journey

Mater Dei adapts to new ways of teaching, learning and supporting one another
Print Article The Good Oil Index