‘Street Angel of Sydney’ comforted the disturbed and disturbed the comfortable

Good Samaritan Sister Catherine McCahill reflects on the life of Sister Pauline Fitz-Walter, Christ’s messenger who was a witness to the Christian message of hope, joy, love and peace.

In October 1972, Pauline Elizabeth Fitz-Walter submitted her thesis at the Regina Mundi Institute in Rome. Her topic was The reality of witness in the Christian message. She wrote:

… witness is necessary for the transmission of the Christian message … When we speak of witness, we are speaking of dialogue, community, authenticity, union between life and thought … Christ is his message … and this message is a life-message empowered by the Spirit of Christ himself. (The human person) is invited to enter the life-stream of this message – to become a living Christian message of hope, joy, love and peace through the gift of a firm faith in the risen Lord Jesus who is the saviour of all people … Christians in post-Vatican II world times, must become, through the power of the indwelling Spirit, the message they proclaim to the world.

I would like to explore Pauline’s life as witness, her embodiment of the Spirit dwelling in the midst of humanity and expressed in her life and relationships.

No doubt, and from what she shared with those of us who knew her, in the heart of her family Pauline experienced love and nurturing. She learnt about God and the ways of God, she learnt about hospitality, about sharing food, laughter and tears around the meal table, she learnt to pray. She also witnessed the pain and separation that comes when life doesn’t turn out as we might hope.

By the time Pauline joined the Sisters of the Good Samaritan in 1948, she had witnessed a fair slice of life in southern Queensland. After completing Senior at Lourdes Hill College in Brisbane she trained as a teacher. She taught in country and city primary schools, she worked as a radio announcer, and she was engaged to be married. From this, the love of Christ drew her to make a deeper commitment.

Three young women entered the novitiate from Lourdes Hill College in 1948 and were given the names of three children to whom Mary appeared at Fatima: Lucia, Jacinta and Francisco. Pauline was grateful that the male name was feminised and she became Sister Francesca. We called her Franny and even after she returned to her baptismal name, we affectionately referred to her as Franny, there was only one Franny! 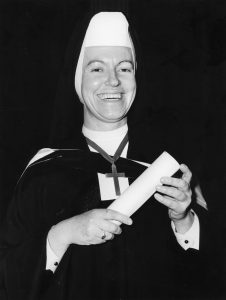 From the beginning, Pauline’s aptitude and passion for learning and teaching was recognised. She spent more than 20 years in education at St Scholastica’s College, the Good Samaritan Teachers’ College, Mount Street (Josephite) Teachers’ College, and the Catholic Education Office. For two years, she was the Postulant Mistress for the Good Samaritan Sisters – a postulant is young woman who is training to be a Sister. Her students – teenagers, young adults and young religious – recall her kindness, her passion for literature, her tendency to divert from the curriculum. For two years, she was the ‘supervisor’ of Good Samaritan secondary schools.

In 1968, Pauline and another Sister were sent overseas to study in Rome for four years. No doubt, all eyes would have been on them as this was the first time that Good Samaritan Sisters had travelled abroad for study. That experience was still fresh when I first met Pauline in 1977. She was teaching the novices the history of the Congregation. I can still recall her passion for Archbishop John Bede Polding and Mother Scholastica Gibbons, our Founders, the first five Sisters and the early mission of the Congregation.

For most of those years, Pauline was struggling to find her place in God’s mission. Her encounter with the poet Francis Webb in 1965 was probably the most significant turning points in her life. Over the next eight years, she found the time and space in herself to know Francis deeply – Francis the poet, the man of deep faith, the man who suffered from incurable mental illness, the man who spent many of his adult years in psychiatric institutions, the man of compassion and tenderness for others, the man who, in her words “lived through the sad poetry of his life, becoming like a hollowed ‘reed’, through which his life-music came.”

By 1977, just four years after Frank’s death, the desire to provide a home for women and men like him became urgent for Pauline. Some of you know better than I will ever know, the consternation and anxiety this caused for Pauline, her companion and the leadership of the Congregation. With the help of Bishop David Cremin, permission for a trial period of two years was granted.

From that point for nearly 30 years, Pauline lived with “the last, the lost and the least” to use her words. The women and men that she encountered, befriended and for whom a home was found are indeed numerous. Pauline explains the role of community living: “Many of our people have been broken through relationships. We try to get them into a ‘web of good’ that can teach them that there is love and healing in relationships. If you know you are loved, you can do great things.”

With changes to government policies in terms of care for psychiatric people, many found themselves homeless and living rough. For many of these women and men, Pauline was indeed ‘The Street Angel of Sydney’. This was the title of the biography written by Grace Chan. Grace remained a dedicated and kind friend for the remainder of Pauline’s life. She sums up Pauline rather poignantly, as “an ordinary woman with an extraordinary capacity to love.” 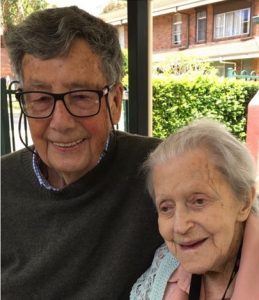 Bishop David Cremin, as I have already said, was there at the beginning of the Houses of St Francis. He remained committed to and supportive of the Houses, acting as mentor, friend, guide and always a prayer companion.

There are times, for some of us as religious, when we move somewhat away from or to the side of our Congregation. Perhaps it is misunderstanding, or absorption in ministry, an upheaval in our faith journey, or any number of things. As I reflect on Pauline’s long life, over 70 years since her religious profession, I see the potential for separation and disquiet, but it didn’t happen. I have been pondering on that reality.

When Pauline and her companion initially moved moved into the Houses, she was instructed to be part of the Newtown community. So faithfully each week, she visited the community, for prayer, conversation and a good sleep. That pattern remained. From what I can see, there was always at least one Good Samaritan Sister on the committee supporting the houses. Pauline was committed to showing up, remaining part of congregational events. Whatever the angst or differences with the Institute, Pauline did not particularise it or blame anyone. As a young woman, she was ministering in a situation in which she found her views and methods “diametrically opposed” to those of the other Sister who was in charge. Her letter to the Mother General is honest and open about the situation, without any blame or self-pity. Pauline always spoke the truth as she saw it, she accepted the reality and sought peace.

What about the Congregation? No doubt Pauline’s ventures and forthright manner caused concern, discomfort and even exasperation. It is not easy to be with prophets. The Sisters, including her Superiors, recognised that Pauline was indeed a good Good Samaritan. We knew her as a woman of prayer, a woman who participated in congregational life, a woman who did not pass by, who acted with deep practical compassion for those who were wounded or left by the side of the road. Last night I received an email from one of our Japanese Sisters who recounted staying in one of the Houses the first time she came to Australia. She wrote – I so admired her. Yes, we did love Franny.

When the last House closed in 2006, Pauline chose to stay in the Parish of St Michael’s at Hurstville. There she continued to bear witness to Christian discipleship – a daily routine of prayer, reaching out and quiet reflection. Close and supportive friendships with parishioners like Rose Polic developed and were maintained. At the time I reconnected with Pauline, her daily routine involved coffee and raisin toast at Westfield Shopping Centre where anyone who wanted a listening ear or a bit of advice would seek her out and not be disappointed.

Moving to aged care was challenging for Pauline. She dealt with the confinement by spending long periods of time in the chapel and the garden, entertaining a steady stream of visitors, and going on various outings. One morning, I noticed her sitting as usual with her prayer book on the walkway behind the chapel. As I walked past, a resident was trying to abscond while the carer attempted to entice the resident back into the building. Ten minutes later, I passed by again and found Pauline still there, this time with the resident sitting calmly by her side as they discussed with some fervor the trail of ants at their feet. Pauline’s capacity for the other person was always evident.

The restrictions associated with the COVID-19 pandemic were challenging for Pauline. Confined to her room, that was self-imposed mostly, she maintained a strong interest in the affairs of the world, and many whom she had befriended throughout her life. She prayed for us, personally and collectively, and she always remembered to check out our concerns.

We will miss Pauline in so many ways. Today we celebrate her life, we give thanks for all she was amongst us. She was indeed Christ’s messenger, a witness to the Christian message of hope, joy, love and peace. God’s indwelling Spirit has indeed born rich fruit. We are humbled. We are grateful. We know that she will keep her promise to remember us before our loving God.