Destruction caused by Typhoon Rai/Odette on the Island of Negros. Images: Sisters of the Good Samaritan.

More than a month after Typhoon Rai, or Odette as it is known locally in the Philippines, tore through the islands of Visayas and Mindanao, killing more than 400 people and wiping out homes and livelihoods, the Sisters of the Good Samaritan are continuing to help with the clean-up and assist people to get back on their feet.

The category 5 storm bore down on the islands on December 16 and 17 last year, leaving a trail of destruction in its wake and affecting more than 1.8 million people. The typhoon brought torrential rain, strong winds, flash floods, landslides and extensive damage to homes, crops and livelihoods.

More than 600,000 people were evacuated, roads were impassable due to flooding and fallen trees and many communities were stranded without power, telecommunications and clean water. 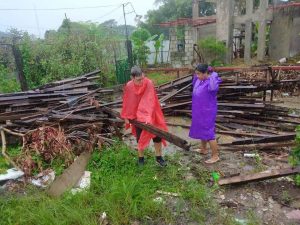 Sister Anne Dixon SGS is one of the Sisters of the Good Samaritan based in Negros, which was badly hit. Anne said the experience of the typhoon was “very scary”. The home village of Sister Leonie Duenas SGS was severely damaged, with houses flattened and crops lost.

“People are saying it is the worst for this island of Negros,” Anne said.

“When the Sisters drove Leonie to her family home, we could see the mountains, which normally protect this part of the island, had been stripped of their green foliage.

“Poor Leonie was shocked and scared as to what she would find, especially when we couldn’t even drive to her place. We had to walk through sugar cane fields, and over fallen trees and electricity poles to get to her home.

“Thankfully, only their kitchen lost its roof and wall. Most of her neighbourhood was either destroyed or had significant damage.” 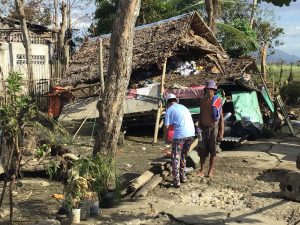 Since the typhoon hit, the Good Sams have been able to assist 36 families to rebuild or repair their homes, and 35 families whose livelihood is fishing, by repairing their nets and boats.

On Christmas Day the Sisters drove south along the main road to Kabankalan to offer assistance to those in need.

“We stopped many times as we sighted struggling folk,” Anne said. “We distributed rice, water, slippers (thongs) and money for materials where appropriate.”

“In Kabankalan we visited the Christian Brothers’ house. No more Christian Brothers are living there, but the caretaker was able to accept our aid for the staff of the Edmund Rice College who had significant damage to their homes. We also called in to the Social Justice Centre at the Bishop’s House and donated to their appeal.”

The Sisters have visited a number of villages over the past weeks, helping those who still have not received any help from the government or other agencies.

“All in all, we have supported well over 300 families materially and/or financially,” Anne said.

“The worst-case scenarios have been seeing families losing not only their homes but all their possessions and often their livelihoods too.

“The fisher-folk, and the farmers who have lost their crops seem to be the worst affected. On our travels it was the banana plantations and the mango trees that seem to the biggest casualties.” 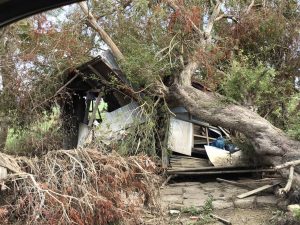 Anne said the unseen effects on families are emotional, due to the stresses placed on their finances.

“Even if just a wall or roof is blown away it costs money to replace them,” she said.

“These people live one day at a time. Work today means food on the table tonight and, hopefully, something to go towards bills and children’s needs.

“A calamity is not budgeted for and will cause great stress.

“But in saying this, I see time and time again that Filipino people are very resilient and bounce back from one setback to another. They enjoy the simple pleasures of life and continue to live with hope and love and a strong faith in their God.”

In more recent days, the Sisters of the Good Samaritan Outreach Centre team and Kinder School staff in Bacolod on Negros Island have finally had the opportunity to start the mammoth clean-up of their adopted parkland.

“Trees were down everywhere. But, somehow, trees are minor when you are seeing all the time broken-down homes, broken electricity poles and broken people,” Anne said.

The Good Samaritan Foundation is accepting donations to help the Sisters in the Philippines to provide assistance to families in need following the typhoon. In Australia, donations of $2 or more are tax deductible. To make a donation, click here.

Vale Sister Pauline Fitz-Walter SGS – a saint and a prophet