Vale Sister Pauline Fitz-Walter SGS – a saint and a prophet

Good Samaritan Sister Pauline Fitz-Walter OAM, described by her friend Bishop David Cremin as “our Mother Teresa” for her service to people at the margins, died on December 16, 2021.

Pauline Elizabeth Fitz-Walter was born at Charleville in western Queensland on May 9, 1923, the second daughter of Mary (neé Murphy) and Cecil who already had a son from a previous marriage. Another brother and sister arrived later. Before she started school, Pauline’s parents separated and her mother took the children to live in Coorparoo, a suburb of Brisbane. Pauline’s father continued to financially support the family, and Pauline maintained a relationship with him with occasional visits.

Her first encounter with the Sisters of the Good Samaritan came with her schooling, firstly at St James Primary School, Coorparoo and then Lourdes Hill College, Brisbane, where she completed Senior in 1940.

After teacher training with the State Education Department, Pauline taught in various schools in southern Queensland and began external study for an Arts degree with the University of Queensland.

For some time, she became a radio announcer with Charleville’s 4VL, conducting women’s and children’s sessions. 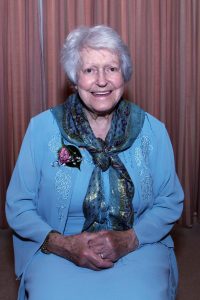 The next 70 years of Pauline’s commitment to being Good Samaritan can be described in four phases: education and formation ministry, tertiary education, ministry with people on the fringes of life, and ‘retirement’. Along the journey there were many junctures and re-directions, but studying Pauline’s life story highlights two of most significance: her encounter with the poet Francis Webb and her studies in Rome.

Pauline’s ministry in education began at St Scholastica’s where she was a teacher at the Secondary College and in the Teachers’ College, being Acting Sister-in-Charge in 1954. From this role she moved to infants and primary classes before an appointment as Mistress of Postulants at the Novitiate for two years.

During these years she completed a Bachelor of Education and a Master of Education with the University of Queensland. Her Master’s thesis, Benedictinism encountered in Australian Education, provides “a critical appraisal of the educational contribution made by the Sisters of the Good Samaritan” within Australia and Japan.

Along the way, and by chance, as for the Samaritan in the Gospel parable, Pauline encountered the poet Francis Webb in 1965 at the gates of the Pennant Hills Convent. Francis had absconded from a psychiatric unit in Orange, NSW and was looking for somewhere to stay and a means of getting there. Pauline already knew something of his poetic giftedness. Despite her best efforts, she was unable to provide either.

The sight of Francis walking away “without help” remained with her for the rest of her life. On hearing the story, Sister Peter Cleary, at the time Secretary General of the Congregation, located Francis and provided an address to Pauline.

For the next eight years, until he died in 1973, Pauline maintained a relationship with Francis through letters and visits to the various psychiatric institutions where he lived. From him and through him, Pauline saw first hand the poverty and degradation of institutional living for people suffering from mental illness. On Christmas Day 1969, he wrote to her:

“I’ll never, never forget your charity. St Paul speaks of the unplumbed height and depth of Christ’s love; yours is a perfect image of it.”

This relationship endured the more than four years that Pauline spent in Rome, studying at Regina Mundi College, and graduating with a Master of Religious Science from the Gregorian University. In a letter home she wrote, “Travel has a grand effect of dispelling from one’s former education many illusions!” Apparently, that happened for Pauline yet, more importantly, was still incredibly enriching. The lecture halls, the students’ residences and the wider Church community were filled with anticipation and hope in those first post-Vatican II years. Pauline was in the thick of it, relished it and maintained correspondence with some of her study companions and lecturers for many years.

Returning to Australia in 1972, she spent the next five years in education, mostly with young adults in teacher education or young religious in various formation programs. However, the impact of her encounter and ongoing relationship with Francis Webb was pulling her in another direction: “I experienced a deep urge to enter a wider world of separation from the neat one I was used to … The aim of this new venture was to give glory to God by doing something practical, though not on a grand scale, about the ‘brokenness’ of our society.”

In 1978, Pauline and another Good Samaritan Sister moved into a house in Surry Hills, part of the Parish of St Francis de Sales, “with three men, each of whom had psychiatric and addictive problems.” So began the phase of her ministry, which became the Houses of St Francis of Assisi, and which lasted for nearly 30 years.

Much could be written about this ground-breaking venture, which at the time challenged so many preconceived ideas about religious life and Good Samaritan life, in particular. We can allow Pauline to summarise:

“… we attempted to lead ‘the last, the lost and the least’ to a new Christic vision.”

“I, myself, came to understand that the Gospel has extraordinary power to heighten an understanding of the movements of God’s love, even in difficult circumstances. I discovered that love, acceptance and laughter could create ‘space’ wherein healing could take place. The ‘acceptance’ found within the Parable of the Good Samaritan began ‘to gel’ within my inner being. 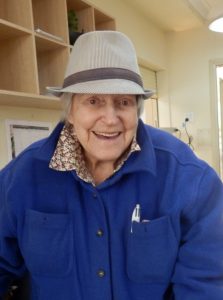 “People came to help as co-workers, and the expansion of the houses into country areas and interstate, took place. God sent ‘cheerful helpers’ into the field … showing me that his ‘healing power’ is always available, if only we are ready to accept. By nature I’m inclined to be slow in seeing viewpoints other than my own. I had to learn to listen to the ideas of others. Thus, I had to try to understand more my own hidden fears that could distort reality.”

Pauline was awarded the Medal of the Order of Australia (OAM) in 1996 in recognition of her “service to the disadvantaged, particularly homeless people and those with psychiatric disabilities and drug dependencies, through the establishment of Houses of St Francis of Assisi throughout NSW and Queensland”.

While the matter of this new venture was still being discerned, an “understanding” Bishop, David Cremin, was appointed by Cardinal Freeman to help all parties discern and to provide some oversight. He proved to be a loyal, loving and wise friend for the next 30 years as numerous women and men received a helping hand, a compassionate loving welcome and the opportunity for a fresh start in life.

When the last of some 30 houses closed in 2005, Pauline continued to live ‘in retirement’ in the Parish of St Michael’s, Hurstville. She continued the ministry of talking, listening, loving, forgiving and praying around the Church, at Westfield Shopping Centre and in one of the public schools where she was a catechist.

In 2013, with her health failing, Pauline moved to St Catherine’s Aged Care at Marsfield. Again, she continued to receive many visitors, to pray, read, write letters spend time with those who were particularly frail or approaching death.

On 16 December 2021, Pauline slipped quietly and peacefully into the full embrace of her loving God. Many will miss her, including her brother George, her nieces and nephews and their families, her cousins, her Good Samaritan Sisters, and the many, many women and men she befriended during her long, loving and fruitful life.

‘Street Angel of Sydney’ comforted the disturbed and disturbed the comfortable